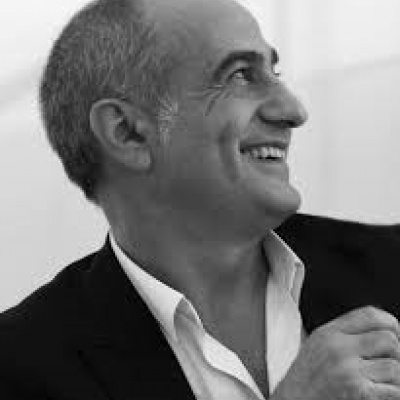 Romualdo Priore born in south Italy the 28th may 1956, he attended Art school in Art Academy of Brera and is a graduate in art in Milan. Currently lives in Milan, Italy.
He began his artistic career begins drawing caricatures and comics. Its path into the world of cosmetics begins thanks to Federico Fellini's wife Giulietta Masina.

Didascalic, too long, perhaps it would be useless to go over here all the steps of life and career of Romualdo Priore. The best way to realize how volcanic both the creative professional, and how sincere is the personality of 'man is to know directly.

Behind the success of MakeUpStudio, he was there as an art director, a professional make-up line that made history.
Creative director or consultant of many cosmetic brands such as Orlane, Perlier, Kelemata, Piana cosmetics, Rimmel....
There was him, as marketing director behind the success of image and products in Gamma Croma, subsequently in Ghota cosmetics and actualy in Chromavis, triggering new attitudes and cosmetic formulations. Almost 20 years of experience and experimentation that have sophisticated and completed his professional profile even from technical point of view.

His career as a makeup artist has seen him collaborate with top fashion designers for fashion show and their advertising: Versace, Armani, Valentivo, Ferragamo, Dolce & Gabbana, Donna Karen, G. Ferrè, Prada, Gucci and others that would take too long to list.
You can investigate among photographers he has worked with Patrick Demarchelier, Helmut Newton, Michelangelo Di Battista, Albert Watson, Oliverio Toscani, Fabrizio Ferri Giovanni Gastel and many others in the fashion business.
I whom he collaborated with Tarsem Singh in The Cell and other famous commercial mouvies.

In the world of fashion: editing of Donna, for example, has for years been an beauty consultant editor, or magazines over the years have hosted on their covers its work and shown his interviews - Amica, Grazia , Glamour, Marie Claire, Cosmopolitan, W, Elle, Italian Vogue, American Vogue, and many others. Not forgetting his books on make-up.
But is it really necessary all this investigation? The reality is that the name Romualdo Priore is known throughout the world and is almost spontaneously in spite of himself.

The professionalism, a deep knowledge of the rules so as to authorize the infringement and change, unstoppable creativity passion, a character not inclined to public relations end in themselves: all combine to make him an artist who works behind the scenes but inevitably be on the stage. And those moments are enough, without clamor, without advertising sought to make a name and a figure respected and admired, even outside of his profession.

Romualdo Priore is today one of the very few trend setter in the world of cosmetics business, one of those trends that create, invent new products, giving guidelines, suggestions, intuit the trend of the taste, influence it. Do not think of an 'eminence grise in the room of buttons: pretty in a really contemporary artist, and this really great, because it declined to perfection and in the changes in the mechanical properties of the reality around him even commercial ones, as is always the case for all great artists, at all times.
The journey of Romualdo Priore is uninterrupted and far from conclusive at the time the financial statements: the passion and the ideas that have guided him up to date with new creations continuous, new developments in taste and thought.